Stroke is a hellish cat...

Stroke is a hellish cat gnawing its way through different disparate parts of the brain. Let's see how!! 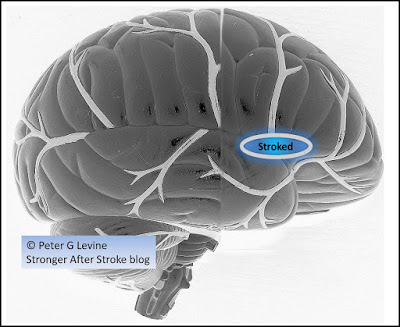 The average stroke kills less than 3% of the total number of neurons in the brain. And that is way worse than it sounds. That small area of infarct insidiously exports itself to all reaches of the brain.

The first part of this process happens in two areas: The "stroked area" (the area killed by the stroke), and the penumbra (the area that surrounds the stroked area" that is still alive immediately after the stroke). The longer it takes to remove the clot, the more brain is "dragged into" the stroked area".
Once the clot is removed, you're left with a stable stroked area" and a stable penumbra. The MDs (hopefully) have done a great job making sure as much brain as possible is saved.
But in rehab, this is where the wheels tend to fall off. Rehab tends to focus on function. This too often means that therapists work on the "good" side so the survivor can "be functional" (able to live their life—whatever that means). This focus on function means the part of the brain the doctors saved is never used. Rehab is expensive, and insurance companies want to save money, so they'll get you out of the rehab hospital ASAP. How much is spent on rehab in a typical stay after a brain injury? "...almost $1600 per day and about $46,000 each (patient)" So how are survivors rushed out of the hospital? Focus on all the tricks and compensations and orthotics needed to get you back "home," wherever that will be (i.e. home, skilled nursing, nursing home, or long term care.) The focus is less on recovery (getting back what you lost) and more on "function" (getting out the door). So while the MDs may have done a good job of saving your brain, no one uses the part of it that remains alive. It takes too long to recover. This sets the survivor up for "learned nonuse." 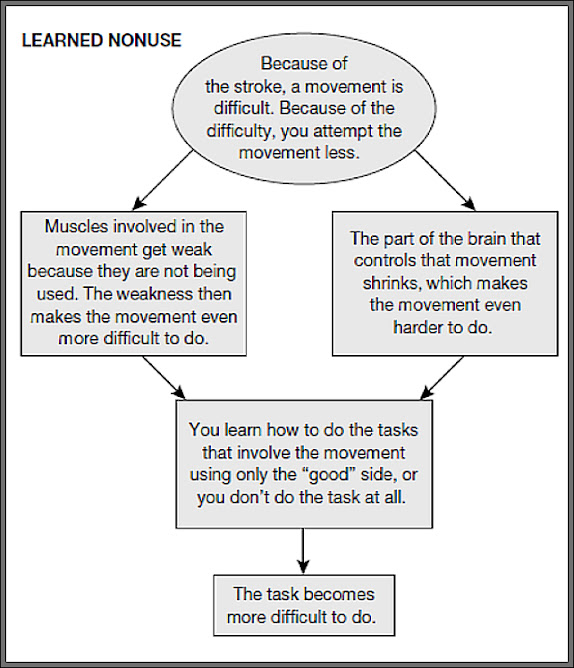 The recovery of the brain is slow. And how that recovery reveals itself is subtle (through what clinicians may call "non-functional" movement). As the survivor is rushed through the process of rehab, the area surrounding the stroke is not used (learned nonuse). And it is usually not used for the rest of the person's life. 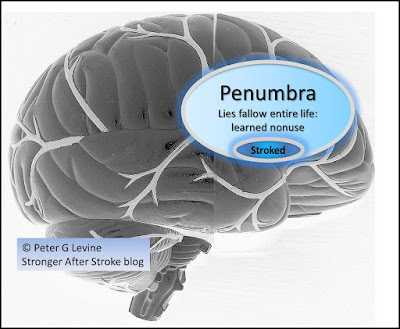 So– now we have a dead area, surrounded by a much larger area that lies fallow.

But the insidious nature is of stroke is not yet fully realized.

Many different areas of the brain outside of the dead zone and the penumbra are dragged into the mayhem. A process known as diaschisis takes over, exporting damage throughout the brain. Why does this happen? The entire brain is interconnected, and when one system goes down (the part of the brain killed by the stroke, as well as the penumbra) all the other areas connected to that those areas also become either less functional or non-functional. Look at it this way: The classic neuroscience way of putting the way the brain operates is this: "neurons that fire together wire together." That means one part of the brain, if it communicates with a completely different part of the brain, they'll both grow. If an area of the brain is not used (as in stroke) other connected areas will become less activated. Those areas (and they can be on completely opposite sides of the brain) shrink. But diaschisis is not the end of the story.

The rambling and insidious nature of stroke marches on… 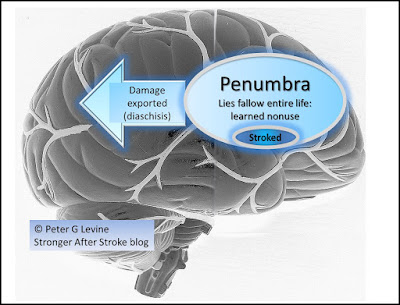 The next issue has to do with the strokes affect on survivors' life. After their stroke, survivors will typically become less socially engaged, less employable, less mobile, etc. The bad news is that the brain is designed to be socially engaged, productive, and to explore new things. The upshot of a less engaged brain is this: The entire brain goes through a literal "pruning." In fact, neuroscientists call this process a "pruning of the dendritic arbor." Throughout the brain neurons no longer used for the daily skills they once were, disengage from each other. In a sort of bad neuroplasticity, the brain becomes less capable. But, you guessed it, we're not done yet… 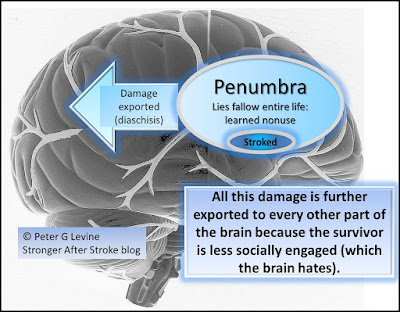 The final, and one of the worst and most insidious effects of the stroke is this: Through a series of direct communication and chemical reactions, the "reptilian brain" is dragged into the evil march of stroke. Areas like the hippocampus and limbic system – areas that are responsible for emotions, and mood regulation, are also wracked by the stroke.

It is heartening, and it certainly is a point of view that I have promoted over the years, that the average stroke is really small. And the stroke sits in a highly redundant, and highly changeable (plastic) environment. All of that seems like good news. You have a small area of death, surrounded by a large family of neurons willing to take over for those that are killed by the stroke.

I wish you could communicate this to everybody that thinks "Oh, you look fine." Everybody that expects you will quickly recover and be back to your "old self".

It has become increasingly clear to me, that what was damaged the most, is my ego. I've socially isolated myself because I'm so ashamed of this invalid version of myself. And I can't seem to talk myself out of it, because the limbic system hijacked the cortex. And vice versa. I've started with meditation 6 weeks ago and I hope this will produce results in a few weeks. I feel like Oprah in the gym while doing it, but it's my only hope.

Peter,
This post explains a lot about what might have happened in my brain after stroke caused by Whipple Disease https://emedicine.medscape.com/article/1166639-overview . My stroke was 05/04/13 and put me in the hospital for 56 days total. I now believe I got infected with Whipple’s beginning in 2007, because that was start of symptoms of muscle soreness. Other than that, I was pretty healthy, until late 2012, when I started losing weight (40 lbs in 4 months) and being sick (diarrhea & bronchitis) all the time. Then the stroke happened and led to the diagnosis of Whipple's and for doctor’s to begin IV of ceftriaxone 2G daily x 4 weeks. It took another 2 weeks for me to gain 1 lbs. and my blood to improve enough to not need more transfusion of red blood & platelets (I had 19 bags).

So that whole time Whipple's was killing neurons! The initial MRI w/ contrast report says lesion is about 2.5 cm x 4.0 cm in my upper motor cortex area, leaving left side hemiparesis (no sensation or motor control) head to toe. Whipple’s inflames the tiniest blood vessels feeding the neuron’s until they die. How much inflammation happened beyond what the MRI showed? How much “neuronal cascade of death” that Dean refers to https://oc1dean.blogspot.com/search?q=cascade or https://phys.org/news/2009-01-discovery-scientists-death-cascade-neurons.html So how big did the penumbra get in my case?

I had little or no motor control and a lot of central post stroke pain (CPSP) for the first 4-6 months. I spent the first year doing e-stim 2 x 30 minutes a day just to get things moving on my affected left side. I am right handed and quickly learned to get things done because I hate asking people to help me and you have to keep functioning in life. How was I supposed to stop the “learned nonuse”?

Year 2 &3 was a few hundred PT & OT sessions and lots of HEP time to be able to walk with AFO & cane.

Fortunately, I had no damage to cognition, speech, memory, emotion, etc., so could have been much worse. I still have left side spasticity, CPSP and a lot of learned non-use, which I continue to try to overcome 5.5 years later. I am also working on acceptance and enjoying life as is more an a bit less emphasis on rehab.