NEWS FLASH: There's No Way to Prepare For Life After Stroke

A recent study seems to sum up much of the whirlwind shock of life post stroke. I can't say it any better, so let me quote the authors:
There are 3 phases in the continuum from acute care to inpatient rehabilitation to home: 3 phases of this trajectory:
1. the stroke crisis
2. expectations for recovery
3. the crisis of discharge
Stroke survivors and their caregivers faced enormous challenges as they moved through 3 phases of the trajectory. As caregivers move through the phases of the trajectory, they do not have a good understanding of the role to which they are committing. Survivors are often underprepared to take on even the basic tasks to meet the patients' needs on discharge 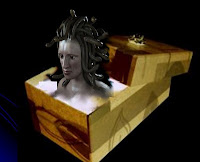 Conclusion: Stroke survivors and their caregivers do not have adequate time to deal with the shock and crisis of the stroke event, let alone the crisis of discharge and all of the new responsibilities with which they must deal.

Stroke is the leading cause of dysphagia.

Approximately 60% of stroke survivors develop dysphagia at some point after stroke. Dysphagia is the most frequent cause of pneumonia poststroke. It can also delay other parts of recovery. (It's hard to recover when you can't swallow.)

The treatment for dysphagia may follow the same neuroplastic rules as every other form of post stroke recovery. For example, repetitive practice of wrist extension will change the brain to make wrist extension easier as time goes on. But repetitive practice of wrist extension has no downside. The worst thing that can happen is that you get tired. But if you repeatedly practice swallowing there may be a risk. What happens if you can't swallow whatever it is you're trying to swallow? You choke! You may aspirate. Aspiration involves having whatever you attempt to "swallow" go "down the wrong pipe". Instead of going down the esophagus to the stomach, the material goes down the trachea to the lungs. Once lodged and lungs it can cause pneumonia. Why does it cause pneumonia? Because the lungs hate having foreign matter inside. So the lungs try to fight the foreign matter. The lungs attempt to fight the foreign matter is the very definition of infection. An infection in the lungs is called pneumonia.

There is a tendency for clinicians to undertreat patients with dysphagia. These clinicians feared that there is a risk of aspirating.

The movements involved in swallowing have been traditionally viewed as reflexive in nature. But swallowing also follows the same basic "repetitive practice equals more movement" rule.  But what if the person can't yet swallow safely in order to practice swallowing?

There is emerging literature that electrical stimulation may initiate the neuroplastic process. Again, this is not only true for the hand and foot emerging research indicates that the same is true for swallowing. Electrical stimulation may provide the "X” factor that provides small amount of movement on which to build more robust movement. This same continuum of care (e-stim to repetitive practice) is used by clinicians in rehabilitation hospitals around the country to reestablish nominal movement. Although not functional swallowing, electrical stimulation provides early steps towards regaining the ability to swallow.

In terms of the repetitive practice itself, the generally accepted way of safely repeating swallowing is called the "The Frazier Water Protocol".

Bleed Vs. Block: Who Can Expect Better Recovery?

Survivors who have a hemorrhagic (bleed) stroke average better recovery than survivors who have an ischemic (block) stroke. But bleed strokes usually have more disability to begin with. In other words, “bleeds”  start out lower but end up higher. The difference has to do with the different ways these types of stroke affect neurons:

“Bleed” stroke: much of the damage comes from the compression on the brain by the buildup of blood in the skull. Once the compression is resolved there is less overall neuronal damage.

Bottom line: The effect of efforts towards recovery can be expected to be less for ischemic vs. hemorrhagic stroke. Rehab strategies that work well for bleed stroke will typically have less rehab potential for survivors with a block stroke.

This is one of my problems with books about survivors who've had a bleed stroke.  Some of the  books give the impression that they a) had more will, b) are smarter, c) have come up with a new and special technique. Again, on average, they start out lower but end up higher. So the recovery process is scary and arduous, but ultimately more fruitful. And it is more fruitful because there is less brain damage.

Of course, the prime example of this fudging of the facts is Jill Bolte-Taylor's book My Stroke of Insight.  She had a bleed stroke on the left side of the brain.  Have a look at this video. Does anyone see any deficit in either the right arm/hand or in her speech?

Almost 90% of all stroke are blocks, not bleeds.

And to be clear: Bleed strokes are terrible. You have a greater chance of dying from a bleed than a block. And recovery from any stroke is to be celebrated.

But beware of inflated expectations suggestions by survivors of a bleed stroke. What they suggest may work for them but it is clear: their recovery will usually be higher given the same amount of effort.