Challenge. Challenge causes change in the body. For instance, challenge changes muscle. Once they are challenged (i.e. resistance training) muscles "micro tear." This tearing (after some days of aching muscles)  increases the thickness of muscles, which makes them stronger. 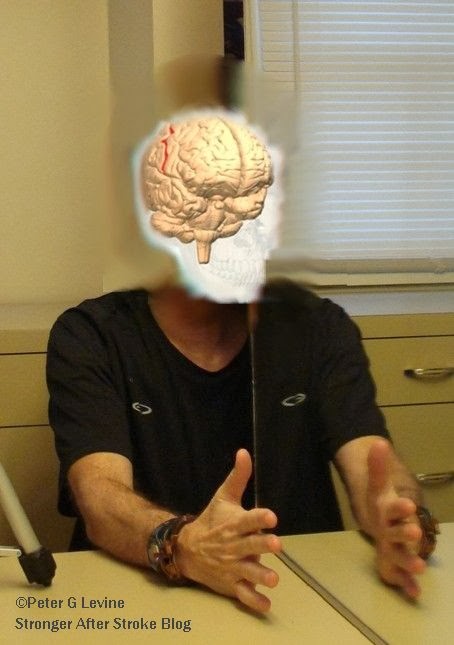 Challenge is the way that you learn; you go to school, you're asked to do things that are hard to do, and your brain changes. Challenge is the stuff that learning is made of. Without going outside of the brain's "comfort zone" the brain will not change. You've probably heard the saying, "use it or lose it" when it comes to the brain. If you don't use a skill your ability to do that skill will get worse. And why does it get worse? Because the part of the brain that controls doing that skill gets smaller. So, maybe the saying should be "If you don't use it you'll lose it." The flipside would be: "Challenge it and gain it." The brain will only rewire the it is challenged enough to necessitate rewiring.

Challenging walking after stroke only has one downfall: a potential downfall. (Info on reducing the risk of falls, here.) Falling strikes terror in survivors and clinicians alike. A fall by a survivor in their care can be a black mark on the clinician's career. If someone falls while under their care,  a cascade of emotional pain follows. There is a ton of paperwork and a formal review of what caused the fall. People have been known to lose their job. Not only that, a lawsuit can sometimes follow.

Survivors are afraid of falls because hitting the ground is never fun. But when you're in a weakened state after stroke falls can be especially dangerous. Stroke survivors tend to fall towards the weak side. The weak side in stroke survivors is often more osteoporotic (weak bones) strong side. So survivor is more likely to fall towards the side of his weaker muscles, and on bones that are weaker.

So here's the question: How can you challenge walking after stroke, when walking is inherently dangerous?

For a long time the hope was partial weight supported walking (PWSW). 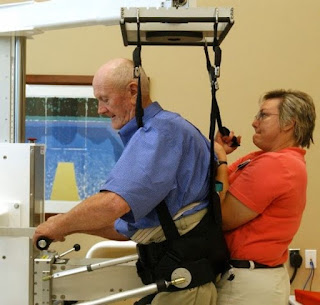 With PWSW the survivor is harnessed from above while they walk. So if they fell, they wouldn't fall (if you follow). The problem with PWSW is that it's laborious to set up (it often takes more than one therapist to administer) and the equipment is expensive. Plus, the research into PWSW was not very flattering. Or, as the NIH put it: "In the largest stroke rehabilitation study ever conducted in the United States, stroke patients who had PT at home improved (paraphrased) just as much as the people who got PWSW." It should be noted that some therapists believe that there was a flaw in the research into PWSW. Specifically, the amount of time on used in research is seen by clinicians as too much. In research PWSW was typically used for 20 to 30 minutes. In the clinic, therapists will often use it for as little as five minutes.

PWSW does have some advantages. Therapists will often use PWSW (where available) when patients are "pre-ambulatory." Pre-ambulatory is a fancy way of saying that these patients are right on the cusp of being able to walk. They just need a little bit of help. Therapists will often use it for people that are bariatric (obese) because these patients can be difficult to manage, especially if they are about to fall! 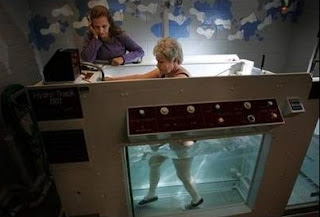 Another option is aquatic treadmills. This allows the survivor to simulate land-based walking but with a reduction in bodyweight. Again, not very available, and very expensive.

There are much less expensive options that fall into the PWSW category. Here is one example that allows for challenge, and eliminates the fear of falling (another form of PWSW).
There are also other things that can help "unweight" and  reduce fear of falling:

What if you're walking, but want to walk better?
If you are able to ambulate without these devices, the best way to add challenge is to add speed. There is a particular technique to get you there, and you can find my blog entry on this technique here.
No comments: