Since the 2nd edition (2012) of Stronger After Stroke, I've been advocating basing survivor's recovery plan on the phase of recovery they're in. So, you might do "Recovery option Y" with someone who is 2 months after the stroke.

But if you did the same with someone 3 days after the stroke, you could make the infarct (brain killed by the stroke) worse.

There was only one problem: Nobody had defined the timing of the phases. I was able to do so after considerable research of textbooks, articles, and expert opinion. So far as I know, my book is the first and only resource that actually specifically delineates post-stroke phases. (The book outlines two ways; a "one size fits all timeline", and a more nuanced perspective based on the fact that survivors are never on the same timeline.) The best place to learn about the post-stroke phases is the book. But you can get a thumbnail here.

Its nice to know clinical research has caught up (where y'all been?). This article (2016)(It references an article on which I'm a coauthor jus' sayin') puts it this way: Rehabilitation interventions targeting at improving a stroke patients' performance should be implemented according to the phase of neurological recovery.

Even the word phases instead of the classic stages is telling, because that is the exact term Stronger used since the 1st edition-- 2008 (although I had not yet defined the phases).

Stronger has changed the conversation, not only among survivors and caregivers (although motivated survivors were the first adopters). More recently researchers, and scientific organizations, have come aboard. This is the way I put it in the 3rd edition:

There has been another phenomenon surrounding this book as well: plagiarism. Either word for word plagiarism, or as a sort of reverse engineering of the whole sections of the book. Even the title has been ripped off. Since the first edition the Journal of the American Academy of Neurology, University of Tennessee Medical Center, and Emerson Hospital, and many others have all called articles in print or on line “Stronger After Stroke.”

The fact that this book has a big footprint is a good thing because I have only one hope for this book.

I hope it helps.
2 comments:

Recovery shouldn't cost an arm and a leg.

I'm pretty scandalized by some of the stuff on the market that claims to help survivors. I'll not name names, but I will say, stuff that costs a lot can usually be done cheaper. And cheaper is good (hasn't the stroke cost you enough??). 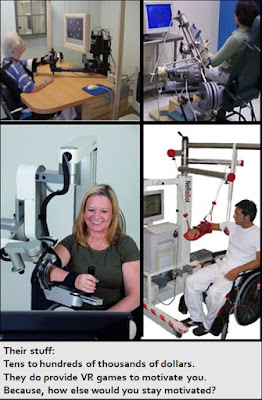 When you're about to buy something expensive, ask yourself this: Can I do basically the same thing without all the flashing lights, cool colors, and fetching website? You can do it cheaper, almost always. And by almost always, I mean always.

I have something on the market. Its cheap (sorry: inexpensive) and it'll do the same basic stuff that the expensive stuff will do.
1 comment: