Don't let PERFECT be the enemy of BETTER 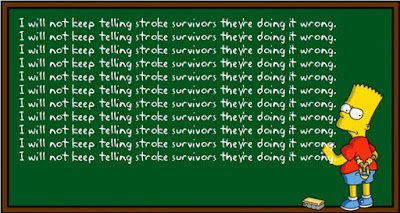 There's a perspective most clinicians have that is false, and that can hurt your recovery. Bluntly, their perspective is: There is a right and a wrong way to move. And stroke survivors move wrong.

Further, they'll say, if you move the wrong way, its bad for your body, and brain.

"You'll hurt your body."
They'll say that, because you're moving wrong, and the human body is designed to move right, you'll cause orthopedic (bone/ muscle/ ligament/ etc.) damage.

Both of the above are only true if you completely discount two fundamental aspects of human motor behavior:

b. The injury to the brain makes the whole move, self correct process slower than clinicians can deal with for 2 reasons: 1. Therapy has limited amount time with the survivor. This is a bigger problem in the USA than many other countries, but everywhere its a problem. 2. Many therapists have a lot of experience with brain injured patients, to be sure. But the frustration, fatigue, depression, changes in the brain, emotional issues, etc., etc. is something therapists can attempt empathize with. But they don't really understand unless they've lived it. There are therapists who have lived in both worlds. I've met quite a few of them. They know. Here's one.

So the question clinicians are trying to answer is "How can I best coach them to move right?" Instead the question should be is, "How can I get them to move better?" Better is always achievable. (Clinicians, look at it this way: Chip away at their present AROMs. If the have 20° of elbow extension, go for 30°.)

In some ways, stroke survivors have the same dilemma as high level athletes. Both athletes and survivors are trying to push through a ceiling in their ability to move. And just like a an athlete, the survivor's progress will be slow and very (very) incremental.

And that's OK, because its not about "right".

Its about better.
2 comments:

Early Walking After Stroke is Good, No it Isn't

There has been a debate for many years about early rehab. Should stroke rehab in the first 1-7 days be intensive? Intensive is a buzzword that means "hard"; more repetitions, more weight, longer distances, etc. Some people suggest you should do a lot very early after a stroke, some suggest (I'm in this camp) that you should wait until the subacute phase.

Within this "early-more-better" argument is a sub-category: Walking. The survivor should walk within 24 hours of their stroke, they say.

I've written about this before. Note that the following link has clickable links so you can have a look at the actual article yourself. Here.

Here's the bottom line: Early is not better. Introduce intensity during the subacute phase, not the acute phase.

Bottom line: If you have the survivor get intensive during the...
There was a long, large study that was done on walking very early after stroke. Note their bottom line for walking early: Fewer patients in the very early mobilisation group had a favourable outcome than those in the usual care group.

Want to know whats going on early after stroke in the survivors brain? Have a look at this. 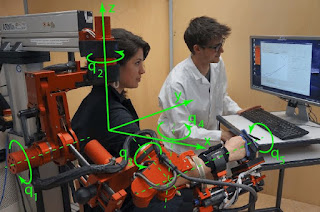 There are a lot of virtual reality/ gaming stroke recovery systems out there. And a ton of folks that try to convince you that, because its a gaming glove, or VR, or even a robot... its just better. Because, haven't you heard? New is better.

Except its not. Motor learning-- the kind of learning stroke survivors have to do to recover-- has been going on in humans forever. So the stuff that always worked to move better, still works.

Don't take my word for it. In this article the authors looked at the difference in motor learning after stroke in 2 groups:
1. Virtual Realty training with the Nintendo Wii system
2.  Playing cards, bingo, Jenga, or a game with a ball

After collecting the data on the two groups, this was their conclusion:

The type of task used in motor rehabilitation post-stroke might be less relevant, as long as it is intensive enough and task-specific.

Other studies (see below) say the same thing: Normal activities work as well as machines, as long as its as long as it is intensive enough and task-specific."