Daytime Suggestions
·   Set an alarm to try to wake up at the same time every day.
·   Include meaningful activities in your daily schedule.
·   Get off the couch and limit TV watching.
·   Exercise every day. People with TBI who exercise regularly report fewer sleep problems.
·   Try to get outdoors for some sunlight during the daytime. If you live in an area with less sun in the wintertime, consider trying light box therapy.
·   Don't nap more than 20 minutes during the day.

Nighttime Suggestions
·   Try to go to bed at the same time every night and set your alarm for the next day.
·   Follow a bedtime routine. For example, put out your clothes for morning, brush your teeth and then read or listen to relaxing music for 10 minutes before turning out the light.
·   Avoid caffeine, nicotine, alcohol and sugar for five hours before bedtime.
·   Avoid eating prior to sleep to allow time to digest, but also do not go to bed hungry, as this can also wake you from sleep.
·   Do not exercise within two hours of bedtime but stretching or meditation may help with sleep.
·   Do not eat, read or watch TV while in bed.
·   Keep stress out of the bedroom. For example, do not work or pay bills there.
·   Create a restful atmosphere in the bedroom, protected from distractions, noise, extreme temperatures and light.
·   If you don't fall asleep in 30 minutes, get OOB and do something relaxing or boring until you feel sleepy.
·   Going to bed and getting up at the same time every day.
·   Removing electronic devices, such as televisions, computers or cellphones, from the bedroom.
·   Avoiding large meals, caffeine and alcohol before bedtime.
·   Making sure the sleep environment is quiet, dark and not too hot or too cold.

Steps to Better Sleep Hygiene:  Behavioral Changes
·   Regular risetime and bedtime—by doing this every day,you can help your internal clock by providing regular cues, thereby improving your sleep-wake cycle.  This should help in getting to sleep faster and reduce the number of nighttime awakenings.
·   Get plenty of bright natural light exposure, preferably in the morning along with exercise. This will give your internal clock a strong cue to run on time.
·   Avoid stimulants, such as caffeine and nicotine.  Avoid caffeine-containing drugs, drinks, and foods for eight hours before bedtime.  Avoid tobacco in the evening.
·   Avoid thoughts or discussions about topics that cause anxiety, anger, and frustration before bedtime.
·   Institute and maintain a definite bedtime routine that is relaxing to help signal the body that sleep is to occur soon.  Examples might include: a bath, brushing teeth, a small glass of warm milk (4-6 oz.), or a light snack. This will help with getting to sleep and will reduce the need to awaken due to hunger.
·   Reserve the bedroom and especially the bed for sleeping. Avoid activities like reading and watching television in bed. Your body needs cues to associate the bed with sleeping and not other activities.
·   If you nap, try to do so at the same time every day and for no more than 1 hour, and ending by 3pm.
·   Don't spend more than 15 minutes trying to sleep—if you cannot sleep after 15 minutes get out of bed and engage in a quiet activity.  Ideally, the activity should be in low light and sedentary, for example, listening to soft relaxing music or meditating, not reading with a bright light or watching television.  Return to bed only when you are sleepy.

Staying asleep
·     Minimize light and noise at bedtime and throughout the night. This will reduce stimulation and promote normal function of the body’s melatonin rhythm that helps to promote and maintain sleep. Ear plugs may be helpful if the environment is noisy. Avoid alcohol within 4-6 hours of bedtime.  When taken at bedtime, alcohol may help induce sleep but disrupts sleep later in the night.
·     Avoid heavy exercise within 6 hours of bedtime.  Exercise increases the body temperature. Sleep onset normally occurs as the core body temperature is decreasing. Artificially increasing body temperature can therefore give the wrong cue to the brain and contribute to sleep disruption.
·     Avoid heavy late night meals. They can interfere with the ability to fall and stay asleep. A light snack at bedtime, however, may promote sleep.  Good bedtime snacks include dairy products and carbohydrates.
·     Assure the bedroom environment is right for sleep: comfortable bed, dark, quiet, and a cool temperature for sleeping.
·     Avoid looking at the bedroom clock if you awaken. If necessary, face the clock to the wall.
Moving in bed
·     Use satin sheets on the bed or pajamas to help with moving in bed can minimize the effects of stiffness/pain.
Waking to go to the bathroom
·     Decrease evening fluids (3-4 hours before bedtime) to lessen the chance of waking up to go to the bathroom.  Make sure that you drink plenty of fluids in the morning hours.  If you often get dizzy when you stand, sit on the side of the bed for a moment or two while flexing your leg muscles before you stand up.
·     Go to the bathroom immediately before retiring.
·     Add some stress-relieving exercise to each day. Walking counts!
·     Helpful Hints:
·     Stress can keep you from getting enough sleep
·     Exercise can relieve stress and help you sleep well at night
·     So can mindfulness, meditation and deep, diaphragmatic breathing
·     7-9 hours is considered “enough” sleep for most adults
·     Plug your phone and other electronic devices in away from your bed. Helpful Hints:Scrolling and staying connected late at night could be sabotaging your sleep cycle
·     Choosing to get enough sleep at night over getting more work done could help you be more productive
·     Bright, blue screens may inhibit melatonin production – keeping you awake longer
·     Set a “bedtime” alarm for each person in the family.
·     Helpful Hints:
·     Going to bed and waking up at a consistent time can help you sleep better
·     To set your bed time, figure out your ideal wake time and count backwards from there
·     A nightly routine with time to wind down could help you stick to your bedtime
·     If you’ve tried everything and still can’t sleep well, you may have a sleep disorder – talk to your doctor to find out what to do
·     Start your morning with a healthy habit, like a walk around the block or a moment of gratitude.
Helpful Hints
·     Adding a positive activity to your morning routine could make it easier to get up if you’re a late snoozer
·     Sleeping past your alarm can make you groggier in the morning
·     Habit chaining may help establish new habits, like doing a few push-ups right after you brush your teeth
·     Add a 20-minute power nap to your afternoon.
·     Helpful Hints:
·     An afternoon nap can help you re-energize and power through the rest of the day
·     “Catching up on sleep” is a myth – sleeping in on the weekend may be sabotaging your weekday sleep cycle
·     It may take a few weeks to get used to your new sleep cycle, so stick with a consistent bedtime and take naps when you need to
No comments:

In the upper extremity:

The treatment protocol consisted of exercises aimed at recovering somatic sensation and motor control of the affected hand. At the beginning of the training session, each patient was asked to perform a series of 25 exercises belonging to 1 of 9 main types of activity. A detailed description of the 9 groups of training activities is provided below. Next, the operator adjusted the protocol to the patient’s specific impairment by choosing exercises that were more challenging for the patient. After this preliminary selection phase, treatment was performed with only the selected exercises. If the patient was unable to perform a given exercise, the operator provided the patient with facilitations. At the end of each trial, the patient was given feedback about her/his performance (eg, number of hits or errors, details about execution, comments). Each patient underwent a total of 30 training sessions. Each patient was required to perform 1 daily hour of exercises at home that were similar to those of the training session. The patient was asked to record in a home diary each day the number and the type of exercises executed, as well as the difficulties encountered.

The experimental intervention (EI) applied the principles of generalized sensory discrimination training14 to 3 sensory tasks: texture discrimination, limb position sense, and tactile object recognition. Training employed a variety of stimuli within each sensory dimension trained, graded progression of discriminations from easy to difficult, attentive exploration with vision occluded, anticipation trials, cross-modal calibration via vision, feedback on sensation and method of exploration, intermittent feedback and self-checking of accuracy, feedback on ability to identify distinctive features in novel stimuli, tuition of training principles, and summary feedback and intensive training.14 During each EI session, subjects were trained on each sensory task, in random sequence, for 15 to 20 minutes at a time. Texture discrimination training used graded stimuli with varying surface characteristics.14 Limb position sense was trained across a wide range of limb positions of the upper limb. Tactile object recognition training focused on discrimination of shape, size, weight, texture, hardness, and temperature using a range of multidimensional, graded objects. 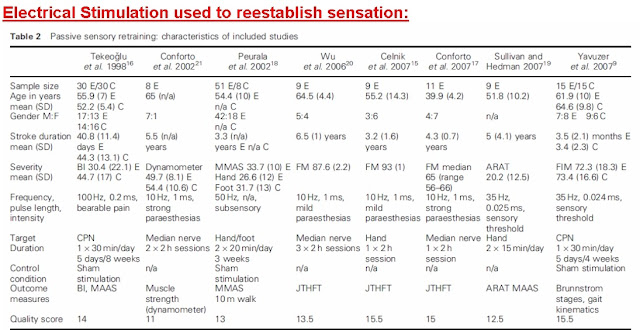 Sensory Retraining Intervention Ten 30-minute sensory retraining sessions were provided by the primary investigator over a 2-week period. The total treatment time was divided evenly between: education regarding sensation and sensory retraining; practice in detection and localization of touch at 7 points on the soles of the feet; hardness, texture and temperature discrimination by placing the feet on a variety of floor surfaces while sitting and standing with vision obscured; and proprioception training of the big toe and/or ankle (analogous to proprioceptive training at the wrist used in upper-limb sensory retraining8). The principles of sensory retraining were similar to those used in previous research8,9,12 and included education regarding the nature and extent of sensory loss; specific, graded stimulation tasks with an emphasis on tasks the subject was able to do (in this case, light touch detection and localization training was tailored for the individual to focus on areas of sensory deficit); attentive exploration of the stimuli by the subject; prevention of visual dominance; comparison with the nonaffected side; quantitative feedback.
No comments: