Saebo in the news...

I'm a fan of one of this blog's advertisers, Saebo. The two guys who started the company are brothers, both occupational therapists. (Find another set of brothers that are both occupational therapists and I'll send you a free copy of my book.) I like the culture that Saebo brings to stroke recovery. Everything they make has a commonsensical perspective engineered in. 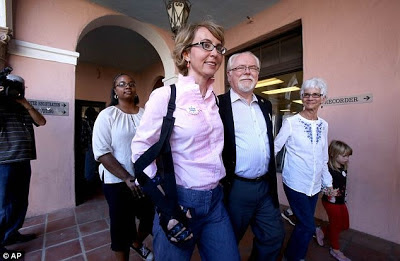 And, as it turns out, Gabrielle Giffords sports one!
(Read my early take on Giffords recovery here) 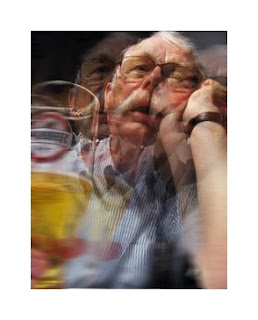 As stated before, I'm not a big fan of drinking after stroke. I found some interesting statements here about the issue:

The effects of alcohol may put you at further risk after a stroke, and you will need to review your drinking and consider cutting down, especially if you were a heavy drinker beforehand.There are a number of factors you need to consider – talk to your GP for more advice:
By: "stroke recovery blog" "stroke blog"
4 comments:

Bill a stroke survivor has trouble putting on headphones.

He is able to get the headphones on using just his "good" side. Here's how he does it: First an earpiece on the "good" side and then use the same hand to move the other over to his "bad" side ear. 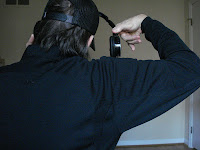 In the short run it may be better to do it with just the "good" arm. It might be quicker, and take less effort.

But in the long run what would be the effect? First of all he'll never learn how to use both arms for that skill. Also, since he's only using the "good" side for that movement, all the other tasks that use similar movements would not be practiced. And a lot of things use that same movement (Brushing teeth and hair, shaving, feeding, etc.) So he'd have less practice specific to putting on headphones, and then less carryover of that task to other tasks.

But here's the funny part: There are a lot of therapists who believe that he should do it one-handed. The thinking is this: The movement needed to complete the task of both arms is "bad" movement.

This idea, that "bad" movement should not be encouraged always struck me strange on the face of it. This is the thinking: "The more you move the worse you'll get."

But everything we know about the brain suggests exactly the opposite. The more you practice something the better you get.

But let's say they're right. Let's say that if you do the task with both arms you would never do it "correctly." Now you have a decision to make. Do you do it "incorrectly" for the rest of your life, or do you not try to use the "bad" arm?

It was me, I would make the decision to use the "bad" arm. Why? Well first of all I stand a much better chance of learning to move the "bad" side better if I use it in every day tasks... every day. Second, movements from one task can feed forward to other tasks that used similar movements. So I might retrain not just for one task, but for a whole bunch of tasks. Third, I don't let the whole portion of my brain "lie fallow" and not do anything. The brain hates not doing anything. The brain goes through what's called "a pruning of the dendritic arbor." It's a fancy way of saying "use it or lose it." If a portion of the brain is not used, the neurons in that part of the brain start to shrink -- or "prune."

But there's another important reason to use any movement you have. Maybe, at the "end of the day" the task remains awkward and uncoordinated. So what? How many people play golf, enjoy it, but don't play perfectly (all of us)? How many people ski, and enjoy it, and don't have perfect form? What about music, or painting, or writing...

Bart: You make me sick, Homer. You're the one that told me I could do anything if I just put my mind to it.
Homer: Well now that you're a little bit older I can tell you that's a crock. No matter how good you are at something, there's always about a million people better than you.
Bart: Gotcha. Can't win, don't try. 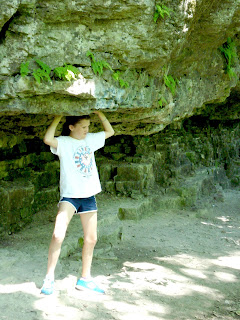 This is my suggestion: Continue trying to do everything. And every time you do it try to make it a little bit better.

Everybody wants to be an expert before they start. But to become an expert involves a lot of hard work. May as well begin now...

Function: You get what you want but not what you need. 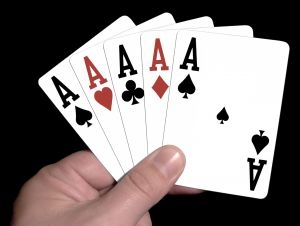 That's all you ever hear. "We're trying to get the patient functional."

1. You want survivors to be functional. You want them to be able do every day, real-world tasks. When therapy ends, the therapist wants the patient to be able to do as much for themselves as they possibly can. Function is a good thing, no doubt.

2. Generally, function is paid for. Lets say the goal is walking. If the patient is not walking, at some point, you have to end therapy. And with the ending of therapy comes the ending of payment.

But there's a problem with this "focus on function." I can be functional and walking, but require a cane an orthotic on my ankle. The cane is used to overcome the weakness of the affected leg. The orthotic on the ankle is used to overcome the inability to lift the foot. Focusing on function means overcoming a deficit. Sounds good, right? But if you are using a cane an orthotic have you really overcome the deficit? Maybe we shouldn't chew. We can put everything in a blender.

I've long been an advocate of a focus on recovery, not function. Think of recovery as a game of soccer. Function is a score of 1 to 0. You win. But there are two ways to win. One way to win is to pick up the ball with your hands and throw it in the goal. The other is training hard, practicing with your team, getting in good shape, practicing skills, getting in the game, and putting all the practice into, well, practice. Using the "good" extremity to accomplish goals (known as compensatory movement), orthotics, assist devices, etc. etc. does not lead to recovery.

Very often function flies in the face of recovery area. For instance, a person may very well have some dorsiflexion (the ability to lift the foot at the ankle). But the movement is often weak and incomplete. Therefore it is "nonfunctional." And so it is ignored. And if a movement is ignored the portion of the brain representing that movement will get smaller. 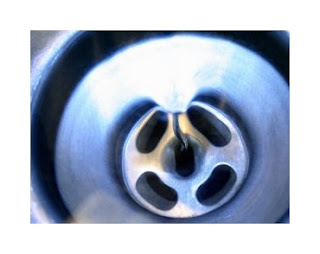 Therapy is upside down. 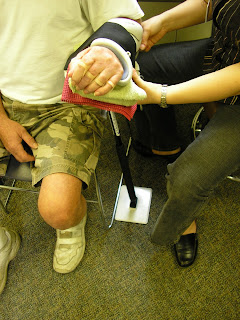 When a survivor first has their stroke the brain is very vulnerable. And because it's vulnerable the survivor shouldn't do very much. The first few days after stroke is a time to convalesce. There is a time to add intensity to the recovery effort. But during the first few days, generally referred to as the acute phase, is not when intensity should be attempted. There are more important things to do. Like saving as much brain is possible (the domain of medical doctors).

So what do therapists do during acute phase? Most therapists involved in acute care will tell you the same thing: "We do whatever they can." That is, whatever the patient is physically able to do is encouraged. But there is often not very much the stroke survivor can do. Yet therapy immediately after stroke is generous. There is often hours per day slated for acute care therapy. But that's not when hours are needed. Hours are needed during the subacute phase.

The subacute phase is usually defined as "seven days to three months." But this is actually a misrepresentation. The fact is, like anything with stroke, it's different for every survivor. Each phase, in fact, happens in a different time for each individual survivor. In any case, it's the subacute phase when intensive efforts towards recovery should begin. Yet for many stroke survivors there's actually a reduction in the number of hours of therapy during the subacute phase as compared to the acute phase. In this way, therapy for stroke survivors is upside down.