In your dreams, have you had a stroke?

Your answer is probably no.

What if you were able to access that memory for your recovery?

Not everything that will help stroke survivors recovery is a therapy - per se. Some things you can do benefit your brain so much that they help recovery as well. An example is Mental Practice. 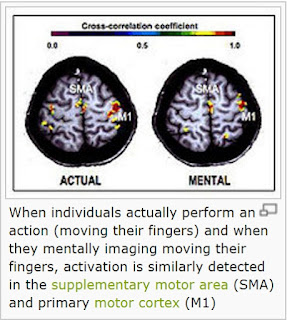 Mental practice -
We've published on this one a lot. The idea is pretty simple - do what athletes and musicians do... Practice mentally. You get the idea, you sit back and imagine a movement, and then when you go to actually do the movement it's better.

There are a few things that you should know if you want to undertake mental practice:
But, again, the good news is that stroke survivors will be mentally practicing things that they used to do perfectly well.
No comments: