What Works (and what does not): Movement, Spasticity, Contracture

Here is a great article on what works—and what doesn't—for movement, spasticity, and contracture. It's in CP, and tracks well with similar reviews in stroke recovery for all ages.
Its a systematic review. Here's the good news: This'll be as simple as possible and no simpler. There is a great "State of the Evidence Traffic Lights" chart that makes the whole thing simple. At the very bottom is the full chart. Also note: What this review says does not work.
What works: Movement
Click any image to make it larger. 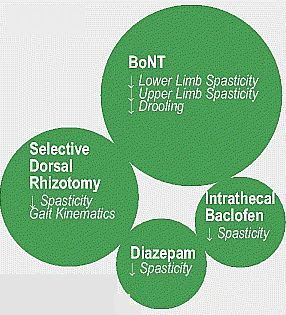 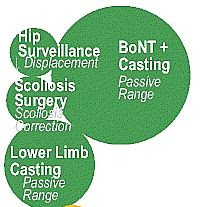 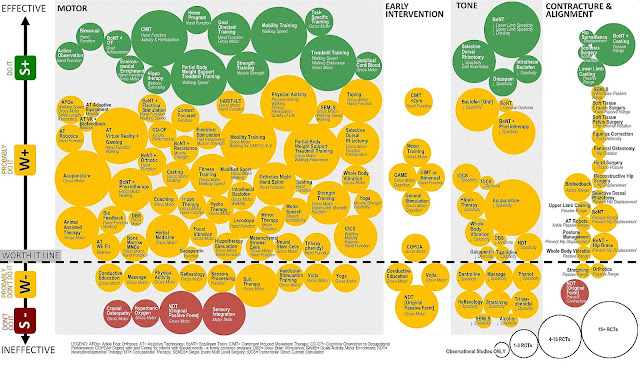 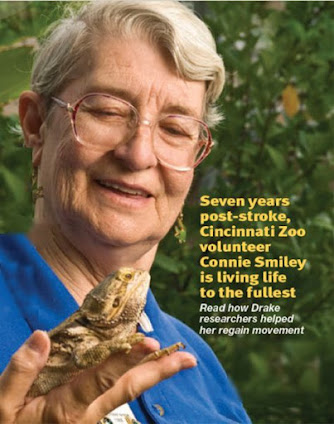 Connie Smiley, one of my favorite people and a survivor who was a friend to our lab for years, passed August 6, 2019; I just found out.

Connie was zero-nonsense and smart, and exemplified what a super survivor is.

A super survivor  is “…someone so unwilling to let go of their career, their independence, or a personal passion that they are compelled to recover. They intertwine recovery with what they love to do.”

When somebody can use their life's passion to drive recovery everything is made easier.

Rewiring the brain in a way that is robust enough to reestablish control over wayward muscles takes a concentrated focus on the affected-side of the body. The focus needs to be near total. This level of focus is only accessible to stroke survivors who have a passion or avocation that drives them to the highest possible level of recovery. Connie Smiley was a survivor who used her avocation to drive her nervous systems towards recovery far beyond any expectations.

Smiley had her stroke "The day before Easter," as she remembers it, 1991. The stroke was on the right side of her brain, affecting her left, non-dominant side. Prior to her stroke, Smiley was fully aware of the absolutely devastating impact stroke. “My husband lived for almost 6 years in a nursing home following his stroke. The damage was too severe to recover—even though he tried. One of the things that motivated me was seeing the restrictive life he led. I realized that the same could be true for me, but I decided that, if there was anything I could do towards recovery, I would do it.”

It is not unusual for stroke survivors to use the fear of a “restrictive life” as a powerful motivator. Fear of isolation, fear of falling, fear of dependence–all can motivate. And motivation is vital to overcoming one of the hardest parts of recovery from stroke: there is often little interest in relearning how to move. There is none of the inherent joy of learning as the stroke survivor relearns movement that they used to do perfectly well. But fear of a “restrictive life” was not Smiley's only motivator. It was not even her primary motivator.

Smiley has a master’s degree in education and has been a teacher of one sort or another, since. For more than 30 years she taught primary school. While she was teaching school she began volunteering at the Cincinnati Zoo, eventually landing a paid full-time position managing the Zoo’s community outreach program. Her job involved bringing small animals local schools and introducing the kids to the animals.  She has the war wounds to prove it! Smiley has been bit by every type of mammal she has handled. She sports scars from snakes, alligators, bearded dragons and was once taloned by a hawk. Although she was forced into retirement by her stroke she almost immediately went back to work at the zoo.

As Smiley got back to work, a remarkable neuroplastic metamorphosis took place. In order for Smiley to be able to handle the animals she was forced to use the limited dexterity in her affected left hand. Because she was powerfully motivated by her avocation, the amount of neuroplastic rewiring was remarkable. But what was more remarkable was where the rewiring took place. Smiley enrolled in a series of clinical trials at our lab; at the time at University of Cincinnati. All of the clinical trials involved brain scans; functional magnetic resonance imaging (fMRI) of Smiley's brain. Traditional MRI provides a static picture of the brain. Functional MRI involves doing something, in Connie's case a finger tapping task, in the MRI machine. The fMRI machine measures change in blood flow in the brain as the task is being done.

Neuroplasticity happens. The brain decides where it happens. Connie showed us that the brain can do the right thing in the "wrong" part of the brain. That's what super survivors do. 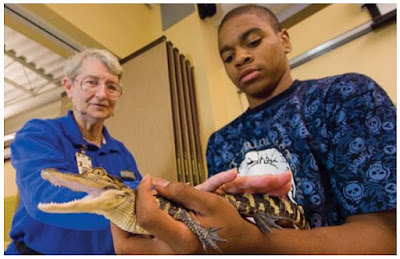