Do Bleed Strokes Have a Penumbra? Nope.

I explain the penumbra after stroke fully here (with pictures!) and explain how important it is after stroke.

But a question kept coming up in my clinical talks: Do hemorrhagic strokes have a penumbra?

After a block (ischemic) stroke, there is an area that the stroke kills (infarct) ("Stroked" in the image below).

Then there's another LARGE area that, hopefully, comes back on line: The penumbra. 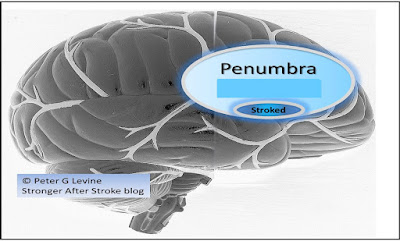 But what about a bleed stroke:? There is no penumbra in bleed (hemorrhagic) stroke.

There was a long debate about this, but as more experimentation was done, and as brain scanning has gotten better: Bleed stroke: No penumbra.

The first thing to make clear is that hemorrhagic stroke is different to ischaemic stroke. In ischaemic stroke, all the fuss... is about perfusing and salvaging the penumbra of ischaemic brain tissue, surrounding the dead central tissue. This penumbra doesn’t exist around hemorrhagic tissue.

The most important finding of these studies is that different from ischemic strokes from proximal or distal middle cerebral artery occlusion a penumbra following the territory of arterial branches does usually not exist after intracerebral hemorrhage.
1 comment:

A Problem with the F.A.S.T test? Yes and no.

The FAST test (Face, Arm, Speech, Time) is used to tell if somebody is having a stroke.

The problem is, it doesn't pick ~15% of strokes. Worldwide, that is ~2 million stroke not captured.

The article referenced above, written in 2014, essentially adopted recommendations published in Stronger After Stroke in 2009. Here it is in a nutshell... 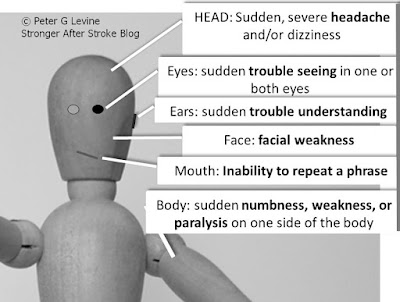 One thing they added, I kinda disagree with. "Leg" which involved a walking test. Which, you know, getting someone having a stroke to get up and walk may not be prudent?

Overall, it helps if everyone knows the symptoms of stroke.

In 90% of all people having a stroke, medical attention was sought by a bystander! Yay bystanders! Maybe we should call them bydoers!

Just over a third of all stroke survivors will have a another stroke within 10 years of their first stroke – a one in three chance.

Every stroke survivor knows that if they're having a stroke time is brain. The quicker you can get to the emergency room, the more options the doctors have. More options = more brain saved.

But how do you know if you're having another stroke? What if the symptoms are different than the last stroke? What if last time you had numbness and weakness in your left arm, and this time you have a blinding headache? Will you know? Will caregivers know?

The common wisdom is to use the FAST test.

But there's a problem with the fast test. 3/4 of all "block" (ischemic) strokes have sudden weakness or numbness on one side of the body. But that same symptom drops to less than half in "bleed" (hemorrhagic) strokes. On the other hand, headache happens in 40% of bleed strokes, but less than 20% of block strokes.

Don't get me wrong, the FAST test has been useful and effective. For instance in the UK, after the FAST TV campaign was rolled out, the time to hospital was reduced. The time from the stroke (the first symptom) to the hospital dropped by 66 minutes. That's amazing.