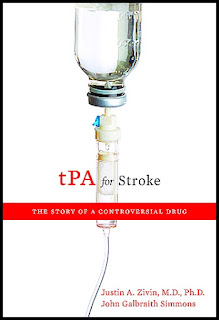 I'm reading the book tPA for Stroke: The Story of a Controversial Drug* about the clot busting drug that's used in "block" (ischemic) strokes. It was published in 2011.

The book tells the long, winding, political, and controversial path tissue plasminogen activator (tPA) took to get to market, and then be—somewhat at least—accepted as a treatment for ischemic (block) strokes. Is TPA still controversial? For some reason, yes.

•A study by the American Heart Association looked at data from 300,000+ ischemic stroke patients, TPA was administered to 3.3% of patients.

⇒2.2% of patients at regular hospitals got tPA

⇒Survivors are three times more likely to get tPA if at a certified stroke center.

⇒Almost 30% of the cases were failure to treat with tPA.

•A 2020 article in the Journal of the American Academy of Neurology found “Overall, about one-quarter of eligible patients with AIS (‘block stroke’) presenting within 2 hours of stroke onset failed to receive tPA treatment.”

⇒The article points out that women and minorities are undertreated with tPA because of course they are.

•Speaking of women: Another 2020 article in the Journal of the American Academy of Neurology found…

⇒Compared to men, women were 30% less likely get tPA.

⇒Sidenote: Women are also less likely to receive aggressive treatment when it comes to heart attack.

⇒There are multiple studies (1, 2, 3) showing that tPA can be used to increase longevity, decrease incrainial pressure (pressure on the brain inside the skull), and reduce injury to neurons from hydrocephaly (brain swelling). Note: t-PA in "bleed" stroke shows efficacy in ongoing clinical trials, not yet in clinical practice. The data we're waiting on is from the CLEAR III trial.

⇒You should know the FAST test. Better yet, know A better version of the test.

⇒tPA is safe and just as effective for a second stroke. Or, if you want it more science-y: "Repeated use of IV-tPA was not associated with an increased risk of intracerebral hemorrhage or death in patients with recurrent acute ischemic stroke."

•Is tPA effective and safe if you're over 80? Yes!

⇒Patients >80 years do better with IV tPA than without it

*The author, Justin Allen Zivin, MD, Ph.D., passed away in 2018 at age 71. He dedicated his career to identifying treatments for stroke, specifically the use of tissue plasminogen activator, or tPA... He encouraged the National Institute of Neurological Disorders and Stroke to change the paradigm for clinical stroke research, organizing a study that required a complete rethinking of how stroke care is managed.

This book was co-authored by John Galbraith Simmons.