The largest study ever done on stroke rehabilitation... 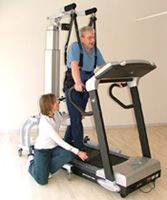 The portion of the NIH that deals with stroke is called the NINDS (National Institute of Neurological Disorders and Stroke). Out of all of the neurological disorders Stroke gets its own letter. Why? Because it's the leading cause of long term disability.
The largest study this country (USA) has ever done on stroke rehabilitation was funded by the NINDS. It was called the  LEAPS trial (The Locomotor Experience Applied Post-Stroke). The LEAPS trial tested "Body-Weight–Supported Treadmill Rehabilitation after Stroke" I'll call it "body weight supported treadmill training" or simply, BWSTT. This is a treatment where the stroke survivor walks on a treadmill while having a portion of their body weight supported by a harness.

The results of the LEAPS trial was published in the New England Journal of Medicine (abstract here), which makes little sense to me. You can hardly get therapists to read their own national association's journal (APTA, AOTA, etc.),  let alone a medical journal.

I recently interviewed one of the principal investigators on the Leaps trial; Katherine Sullivan. You can read the entire interview here.
The trial had mixed results. The first thing that caught my eye was the number of "serious adverse events" in the people that got the BWSTT, compared to the control group (The control group got regular physical therapy).
For instance the BWSTT group had more recurrent strokes, more fractures and more hospitalizations than the "regular therapy" group. The BWSTT group also had more falls.
The other thing that immediately pops out is the conclusion that the authors come to:
BWSTT "...was not shown to be superior to progressive exercise at home managed by a physical therapist."
I actually think that BWSTT works well for some stroke survivors. This is one trial, and although it's a well-run trial, maybe there were some problems with the way it was set up. Pure conjecture on my part, but the amount of time that they had people on the treadmill seems excessive. They were on the treadmill for up to 30 minutes, followed by 15 minutes of overground walking.
The amount of time spent doing an intervention is called "dosage". And just like any drug, if you get the dosage wrong it can do more harm than good. I suspect that BWSTT at a lower dosage, along with leg strengthening, and cardiovascular strengthening would be more beneficial. Of course, for some stroke survivors, especially younger ones, the dosage could be increased.
And that's really one of the points that Dr. Sullivan makes in the interview. The way a randomized controlled trial (like the LEAPS trial) is run, is nothing like the way that therapists typically do therapy. Therapists are more sensitive to the needs of the patient. But once patients -- called "participants" in research studies -- into a scientific protocol, it's one-size-fits-all. But one size does not fit all. Why? Because every stroke is different.
It's a cliché because it's true.
~
5 comments: