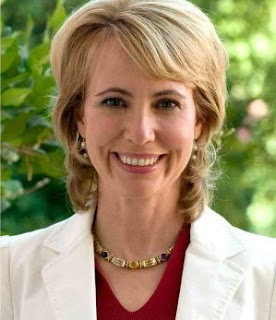 I find it interesting the way the media has reflected the rehabilitation of congresswoman Gabrielle Giffords. "She is talking," they say. "And walking." "And responding to commands” “And moving both arms” An article in the British paper The Independent puts the hyper optimism this way…

In the weeks since, doctors have been impressed by her recovery, which has been described variously in press reports as "miraculous", "astonishing" and "confounding all expectations". On Sunday the Observer carried a piece headlined "Triumph of the human spirit heals the wounds of Arizona tragedy".

But what's the truth about her prognosis for recovery? I wish her best, of course. But I'm skeptical that the hype is an accurate representation of the recovery. Anyone declaring this anything but a work in progress is whistling a bit of Dixie.

A good article about the anatomy (literally) of the injury is available in Scientific American.

The article points out that there are 2 things affected by a bullet to the brain. First, the obvious death of the neurons that lies in the path of the bullet. Second, neurons outside of the direct path are damaged by waves of pressure that follows the bullet.

The bullet went in the front of her head and exited the back, we think. It may have taken the opposite trajectory, experts disagree. Her eye socket was affected. She had surgery to repair the socket 2 weeks or so ago, but more surgery is needed. 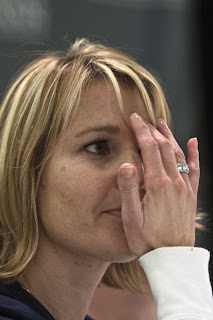 A nurse that works with the Congresswoman touches her head where the wound is on Gifford's forehead.

1. Her injury will allow for relatively rapid recovery early (now) whereas recovery will be much more difficult as time goes on. There are 2 reasons for this:

2. There are 2 levels of recovery; one is to get back to be able to take care of herself. The second is to get to the level where she can continue to work as a congresswoman. Number one is doable. Number two...?

3. The bullet entered the left side of the front of her head and traveled through her brain, exiting through the left side of the back of the head. It did not cross into the right side of her brain. Language is typically on the left side of the brain. She's been responding to commands so she's not receptively aphasic. Although it is still to be determined the complexity of information she can process, regarding basic commands, she can understand what’s being said to her. But the speech...that’s a whole other thing. She’s been involved with Melodic Intonation Therapy (MIT) which uses the right (uninjured) part of the brain and she’s been singing the lyrics from songs. But she’s doing this because her speech may be very limited. Conjecture on my part; but if she had volitional speech they’d be focusing on that.

4. People make the mistake of thinking that a brain injury is simply the brain minus the dead tissue. But, because of a process known as diaschisis, other areas of the brain are affected. It is not the brain minus the hole in the brain. It is the brain, minus the hole, plus the effect on all the other parts of the brain that that hole used to communicate with. The brain is very “use it or loose it.” So when a portion of the brain dies, neurons that used to communicate with that area essentially shrink in a process known as “dedritic pruning.” And there are other issues as well, most of which people who would read this blog would know. Brain injury affects

A more three-dimensional perspective will be available in about a year. But the process of recovery may extend throughout her life.

I wish the congresswoman the best.