For stroke survivors, the part of the brain that was used their entire lives to control particular movements is dead. The dead portion of the brain becomes a fluid-filled cavity (called an infarct). Some of the neurons used in the pre-stroke movement may be reengaged. But those neurons will have to create novel relationships with other neurons to recover the pre-stroke movement. There is no potential to relearn a movement in the same way it was originally learned.
Motor relearning after stroke has another distinction from motor learning. Most motor learning that we do is derived from play. The joy of learning a new skill propels us the development of that skill. Consider skiing. You start out and you fall (and fall and fall) and you get very wet and very cold. And then you do something right and that feeling of making the turn and carving the snow becomes the carrot at the end of the motor learning stick. But stroke survivors are not learning new skills; they’re simply relearning movements that they used to do perfectly well as they attempt to cajole new neurons to do old tricks. Where’s the fun in that?
The fact that motor relearning is not necessarily fun provides a supreme challenge to the coaching abilities and motivational skills of therapists as they shepherd stroke survivors, not towards the joy of playful motor learning, but towards the monumental task of motor relearning.

In some ways relearning to move after stroke and “regular” motor learning are similar. Both require neuroplastic rewiring of the motor and sensory portions of the brain. Both types of learning require the learner to do the hard work (or play) of learning. No therapist, no matter how talented, can learn it for them. This is where the coaching skills of clinicians are tested. Motor relearning only happens if the stroke survivor remains motivated to move. And stroke survivors will only remain motivated if they know why they're doing what they're doing. The neuroscience is clear: only through the volitional movement of the stroke survivor does neuroplastic brain rewiring take place. Providing stroke survivors with a nervous system “user’s manual” complete with “instructions” and even “troubleshooting tips” is vital to the process of recovery. And just like any good manual, the simpler the better.

Therapists usually think about the nervous system in terms of upper motor neuron vs. lower motor neuron, brain vs. spinal cord or central nervous system vs. peripheral nervous system. There is another way to view the part of the nervous system that impacts motor learning: front vs. back.
Consider the following thought experiment. You decide you will scratch your head, but you don’t want to mess up your hair, so you need a single nail to fall on the exact epicenter of itchiness. You begin by estimating where your arm and hand is in space (proprioception). Messages from the muscle spindles, Golgi tendon organs and other proprioceptors provide the feeling of the position of the hand and arm. That feeling becomes a sensory impulse that enters the back (dorsal root) of the spinal cord. The impulse travels up the spinal cord and ends up in the back of the brain, in the sensory portion of the cortex, just behind the central sulcus, a large fissure that separates the front of the brain from the back. The impulse, with “fine-tuning” by other parts of the brain, jumps to the anterior portion of brain and provides a movement strategy. These instructions descend the spinal cord and exit the front of the spinal cord. The impulse then goes into peripheral nerves which terminate at the target muscles that power the movement. To review:

Back to front. You scratch your head. But let’s say you miss your target and your nails land in the wrong place. You use this feedback to self-correct and you again send an impulse from the back to the front of your nervous system. Your nails target the exact point of itchiness. The adjustment that you’ve made is the essence of motor learning. In this thought experiment each attempt was felt and each feeling was used to mitigate the next attempt.
Now let's continue the thought experiment with a more complicated movement. Consider typing. Typing involves precise and delicate movements of the fingers. Learning how to type involves feeling the position of the fingers (proprioceptive input) followed by repeated attempts to hit the correct keys on the keyboard (motor output). Each time the pinky finger makes a foray towards the “enter” key the feeling of a correct attempt is processed by the brain. If enough repeated attempts are successful, the movement is learned. If the learned movement is done over weeks or months or years, it is seared as a neuronal pathway into the brain. This is why we never forget how to ride a bike or swim even if we haven't done either in years. The motor strategies are “hardwired”. Hardwiring useful patterns of movement in stroke survivors is motor relearning.

Electrical stimulation for subluxation. There's a lot of info out there, and its confusing. That's where I come in!

From Stronger After Stroke: 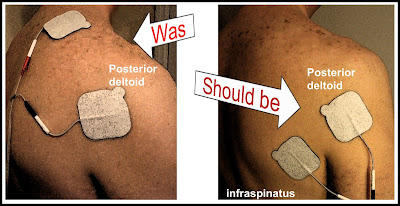 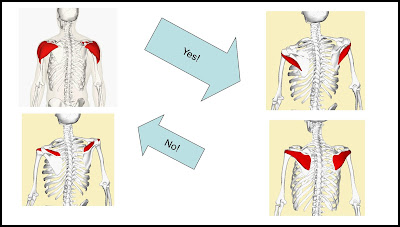