An Open Letter to "Payers" Regarding Stroke recovery: You're Doing it Wrong 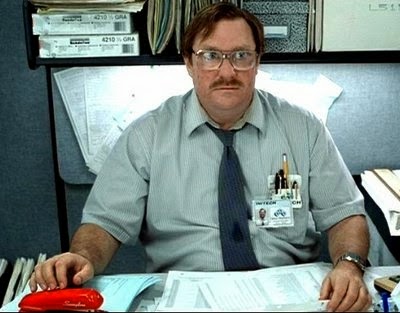 I'm sure you want to help stroke survivors. A survivor that is home in the pursuit of happiness is healthier and cheaper.

But there's a problem... The systems that insurance companies and Medicare ("payers") have developed is a hodgepodge based on a patchwork of incorrect assumptions and old science.

The following are some recommendations to better align insurance regulations with the aspirations of survivors.

1. Make immediate screening for TPA mandatory, even in the most rural hospitals. 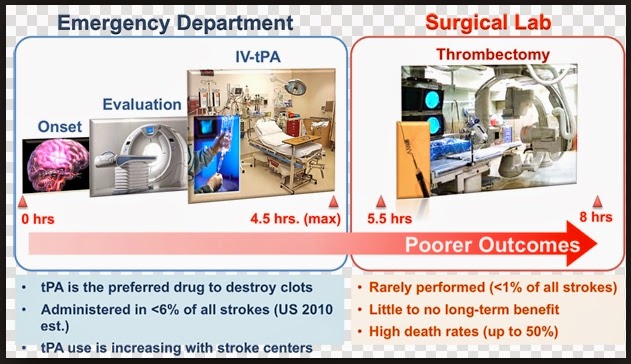 2. Where a survivor goes for therapy matters. Unfortunately, the decision determining where the lion's share of recovery will take place is made within the first few days post-stroke— way too soon. Given the emerging healing in the brain acutely there is simply no way for any clinician to predict where that survivor is going to be, functionally, in a week, let alone a month – or several months out.

There are some who believe that future movement can be predicted within the first week post stroke. However, those predictions are accurate only because they force a self-fulfilling prophecy. Based on the algorithmic prognosis, survivors are put in less than optimal rehabilitation settings. Thus, they do not reach the highest level of recovery  providing justification for the original in-hospital prediction.

Instead of forcing therapists to make this decision in the first few days, wait until day 14. By then the resolution of the penumbra will have revealed true future potential-- at least in ischemic strokes. Hemorrhagic strokes take even longer to predict.

3.  Clinicians are forced to discharge survivors once they have plateaued. However, given the massive potential brain plasticity, it is now known that plateau is a slowing, not an ending, of recovery. Given the potential for recovery into the chronic phase of stroke, complete disengagement from therapy is a mistake. I would strongly suggest maintenance visits with therapist, introduction to well-trained stroke specific exercises at local gyms and workout facilities, as well as distance (i.e. phone calls) with therapist. 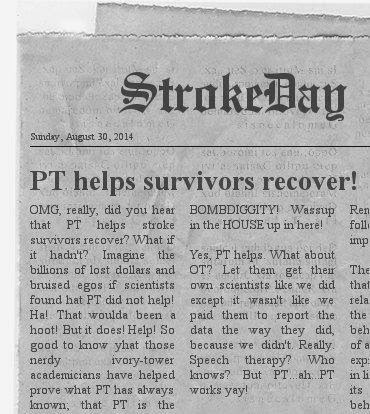 So here is a bit of good news: PT helps survivors recover. Which you woulda thought had already been proven, but here's some funny: Very little has been proven with rehab vis-à-vis stroke. And then there is the little problem of a pretty long tradition of clinicians in rehab deeply believing in therapies that, once examined in the light of well run research, looked very meh. And speaking of such...

This article reviewing the effectiveness of PT on stroke recovery is a gem (and not just because it references more than 10 articles on which I'm a co-author!). It doesn't just comment broadly on PT post-stroke, it nuances it. Some things work, some things don't. Guess what goes in the "doesn't work bin?" Guess. Here's a hint, this blog has said this for a long time... Like here. And here. Thats right...

But. The overall message of this article bodes well for PT and for survivors. Namely: There is strong evidence for PT interventions... in all phases poststroke.
No comments: 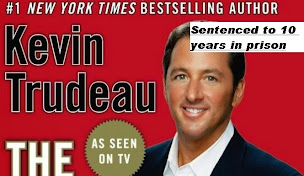 Anyone looking online for a magic bullet to help reverse stroke will end up with the same group of scams. There's the neuroaid scam. The wheatgrass scam. The Neuro-IFRAH scam. The SNE Seabuckthorn scam.

A-level scams: I sell you a "treatment." Does it work? Who cares!? I'm Selling! A-level scams tend to not last very long. If it doesn't work and it's harmless, the public will soon lose interest. And if the "treatment" hurts people the scammer will be sued into oblivion.

What's so fun about all the B-level scams is that they're so easy to investigate. Really, this inter-web thing is great!
(I Think B-level scammers think we don't have access to the interweb!) 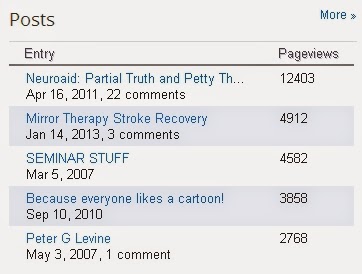 Up until now my favorite scam has been neuroaid. And not just because my blog entry on neuroaid is the most read blog entry in SAS-blog evah! No, neuroaid was my fav because their conflict of interest was so obvious (the people on their scientific advisory board were also doing the research).

But my new fav is the Institute of Neurological Recovery. Although I feel a bit lame here because so many before me have pointed this scam out. Here as well. Hilarious radio commercial here.

Basically the scam is, you come in-- even years past your stroke-- they give you a shot (1st shot ~ $6,800- info from a recent patient) and you're better (video here) (another here). And they have research. Check out their "research" page. See the first 3 links? They all point to articles whose lead author is one Dr. Tobinick.

Where's the challenge in that? They're not even trying! They even suck at obfuscation! Does the injection work? I don't know! But neither do they!

BTW, their "big" study involved looking at charts of patients and, based on no standardized tests said, "Yeah, all these people got better."

In some ways, B-level scams are worse. B-level scammers are often clinicians, and clinicians should treat using things that have scientific evidence specific to that treatment. Occasionally there are treatments that are missed by science, but shortly there reaches this critical mass of interest in the treatment. Once that critical mass is met, researchers get very interested, and they investigate. So, a good indication that a scam is a scam is that only the folks involved in the scam have investigated. So the scam is never investigated with anything close to science because, they're scammers, not scientists.

B-level scammers posture as scientists. But they're not scientist. The first thing a scientist would do when they say "my thing works" is to recuse themselves from the testing. It's called blinding. It's science 101. You want to make sure whoever is doing the testing is unaware which group (control/expiremental/different dosages, etc etc) the participants are in. Otherwise there's a clear conflict of interest. Otherwise, they'll say "My thing works great! I just tested my thing! And my thing works great!"