A test that predicts when survivors may die 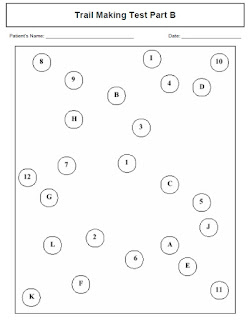 A test of mental ability after stroke can predict how long a survivor will live (Find the study here.)

Poor performance on these tests can predict mortality in stroke survivors, a full decade before death. Previous tests have shown a link between heart disease and dementia after stroke and mortality. This is the first to show small amounts of cognitive decline correlating to mortality.

Here are the tests that they used.
The longer it takes to do the tests the more "impaired psychomotor speed." Participants that were the slowest third of the group for both tests were more likely to die.

Also a decline in mental function before a stroke can be an indicator of an impending stroke.

Pete, what if my stroke left me with aphasia, but it's getting better?!

For a long time I couldn't order the letters in the alphabet. I still leave out some numbers when I count--but I'm getting better all the time.

Does the test actually help anyone? The kind of test can be a blow to the stroke survivor and the family. Especially younger survivors.

Thanks for your comment. Your question, "Does the tests actually help anyone?" -- the answer is no. What I think what the researchers found interesting was that there was a correlation between lower test scores and mortality. I think the idea is to lower the score, the less the brain is functioning well, which is an indication of a larger amount of brain injury, which predisposes somebody to an earlier passing.

For me this was the easy test. The hard one was being read a series of numbers and then letters and having to recite them back in ascending order, number,letter,etc. The doctor told me I was the first person to get thru all the exercises. Even at that he refused to declare me normal.
I was pissed.

I guess I'm the outlier here. My performance on these is miserable at best...but I suspect I will live a great deal longer. (My stroke was a complication of deep brain surgery, the surgeon severed a blood vessel to access my lesion.) My remaining deficits are primarily cognitive in nature. For me, overcoming the physical deficits was far easier than the cognitive.