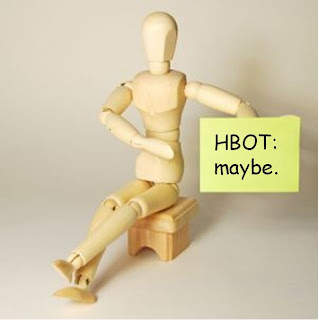 Hyperbaric oxygen therapy (HBOT) is something that's often touted to help stroke recovery. HBOT involves the breathing of pure oxygen while in a sealed chamber. The oxygen is  pressurized at 1-1/2 to 3 times normal atmospheric pressure.

HBOT is used medically for the effective treatment of

Does it work in stroke? Bottom line: There is insufficient evidence to recommend its use. And it does come with risks.

It may work but the ducks get in the way...

The story of HBOT for brain injury including stroke is full of clinicians, characters and quacks. One of them is William Hammesfahr, a neurologist. You might recognize the name; in the famous Terri Schiavo case Hammesfah disagreed with almost every other MD, saying that Schiavo could recover from what had been described as a "irreversible persistent vegetative state." Hammesfahr claimed that he could "cure" Schiavo to "the point of being able to communicate." Hammesfahr suggested HBOT should be part of Schiavo's treatment. 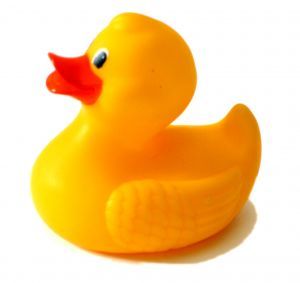 The board of medicine in Florida in 2003 accused Hammesfahr of "...performing medical treatment below the standard of care, engaging in false advertising concerning his treatment of strokes, and exploiting a patient for financial gain."

Hammesfahr also claimed to be "nominated for a Nobel Prize."  Someone had recommended him for the prize, but that someone wasn't qualified to nominate for the prize. "Qualified Nominators" are a very small and select group of previous laureates and academicians primarily from Denmark, Finland, Iceland, and Norway.

The legacy of weirdness continues when it comes to hyperbaric treatment...

The mantle for HBOT seems to have been passed from Hammesfahr to the Neubauer hyperbaric neurologic center.  (It is worthwhile looking at all the credentials. The photos are interesting as well...
addendum 11.3.13, all links on that page now lead to a page that says "You have tried to access a link that does not have a page associated with it.". A great take on the clinic can be found here.  (Apparently, the director of the clinic holds no malpractice insurance. "Why?," you might ask. Read on!)

Still, it's not a question of personalities; the question is, does it work?

It may. Definitely more research needs to be done. It seems to work acutely in animal studies. In rats studies it seems as if there's a better survival rate as well as better outcomes if done within the first few days after stroke. This makes sense.  The brain is, during the first few days after stroke, trying to recover. Being hyper infused with oxygen may be a good thing.

And therein lies the rub. If you have a stroke survivor in the  HBOT sealed chamber during the first few days after stroke and there is an emergency you can't get to them. If you try to pull them out of the chamber immediately they get "the bends" described by Wikipedia thusly... 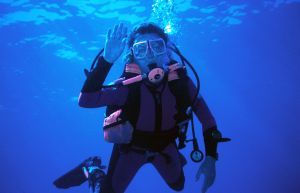 "Decompression sickness (DCS; also known as divers' disease, the bends or caisson disease) describes a condition arising from dissolved gases coming out of solution into bubbles inside the body on depressurization."

And bad things have been known to happen in the HBOT chambers. In at least some studies there is an increase in seizures. There've also been explosions and fires (remember this is compressed pure oxygen; highly flammable.) Here  is a case where a victim died, and another victim was critically injured in the HBOT chamber. The accident happened at the Neubauer Hyperbaric neurologic Center.

Here is what I've gotten from my research into HBOT:

Bottom line: HBOT may work during the acute phase after stroke. However, a lot more research needs to be done and the safety issues need to be addressed before it can be recommended.

From one of my quackery posts came this;
Liquid oxygen drops are very helpful in stroke prevention and remedy as a liquid oxygen solution will greatly increase oxygen in the body. Because of this reason, I refer to liquid oxygen as supplemental oxygen. For post-stroke prevention purposes, a stroke sufferer should add 25-30 drops of liquid oxygen to each glass of drinking water.
Maybe it came from this trial.
The Therapeutic Acqueous Oxygen (TAO) Trial: using supersaturated liquid oxygen as a new stroke treatment.
http://www.uclahealth.org/body.cfm?id=403&action=detail&ref=1354
I personally don't believe HBOT would do any good unless you get your pericytes to open up your capillaries and then only in the first days.
Dean

"The Therapeutic Acqueous Oxygen (TAO) Trial"...they spelled aqueous wrong. You wanna tell 'em or shall I?

You can, you know as a patient I have as much influence as a laboratory rat.
Dean